It is a truth universally acknowledged that cakes bring out the worst in people. They frustrate you by sulking in the bottom of the tin refusing to rise, or puffing up like blow fish in improbable directions, to the delight of your smug neighbour whose worked perfectly. They goad you by tearing into pieces if you spread the buttercream too quickly, or if you spread the buttercream too gently, and if you spread the buttercream too slowly, it’ll go hard, so you can’t spread it anyway. Their golden rule is whatever you do, DON’T OPEN THE OVEN DOOR. But you MUST OPEN THE OVEN DOOR to test if they’re cooked. And then if you DO open the door, DON’T CLOSE THE DOOR because the rush of air will cause them to go into melt down like a prima donna in her dressing room on an opening night. But, just like a prima donna on opening night, they can also step out onto stage and blow you away, which is why you keep trying. Cakes are a nightmare dressed like a daydream, a high rise of opportunities for failure, iced with caprice of your very best intentions.

As you can tell, I have a serious personality clash with cake – it’s just never going to work between us.

So it is not without trepidation that I began week 4 at Ballymaloe, which culminated in a bake off-style cake competition judged by our inimitable senior teacher, Pam. This is her demo of the chocolate cake and also her spectacular birthday cake. 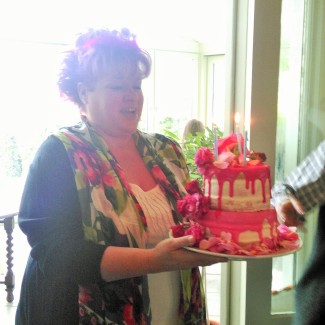 As you can see, Pam knows cake and Pam knows cake decoration, and there is nowhere to hide. We are paired off and set the challenge of baking the best four tiered chocolate, coffee, lemon or orange cake, Ballymaloe-style, and decorating it free-style. I was with the lovely, and highly competent Laura and we were set to make Aunty Florence’s orange cake, a Ballymaloe staple which I gather was voted one of Ireland’s top 8 signature dishes for something or other at some point, and damn good it is too when made by Aunty Florence, who herself was around for the tasting – so no pressure.

Unfortunate project mis-management mean that it fell on me to make our competition cake, but never the less, all was going to plan: the caramel was cooling nicely, the sweet peas were beaming merrily around the kitchen from their vase and by 9:30am, the sponge mixture was divided evenly between the tins and ready to go into the perfectly pre-heated oven. This was when I turned cold with dread and realised I had forgotten to add the vital tablespoon of orange juice. This is a cardinal sin with no chance of salvation, as to add the liquid now would mean stirring it in, which would mean disrupting the air delicately trapped in the sponge, but to leave it out would result in an orange cake which didn’t taste at all like orange. Laura’s nostrils flared in alarm (she is too nice to say anything) as I took the risk and sloshed the OJ over each cake, and shoved them back in the oven, grateful that Pam was across the other side of the kitchen saving a runaway Kenwood mixer. Needless to say, this was the death knell of our chances at victory, as, true to form, my last minute addition meant “the cake crumb was a little tough”. Damning words. The caramel shards and the sweet peas (note the non-cake elements of the ensemble) came through for us though and earned us a 9/10. Here it is: 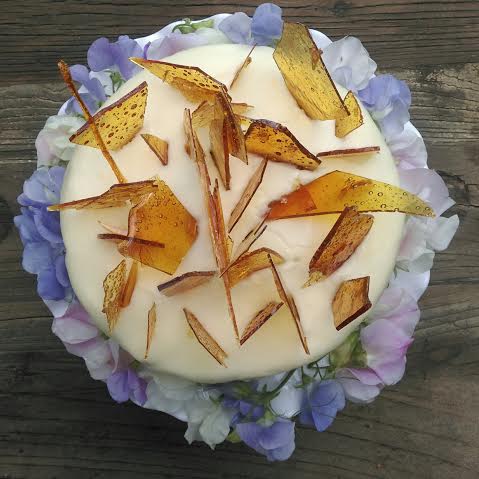 It’s a bit of a poser’s cake, but we did our best. Happily, just as I started to effervesce with the sugar rush having tried everyone’s cake in the kitchen, Darina thrust a candle between the shards and presented my (now birthday) cake for one of the cast members of a local Opera festival who were visiting – meaning everyone could see and sing to the cake, but nobody would ever sample the sub-standard crumb while I was there. They can have my cake and keep it – good riddance. They also sang us a ditty in the garden from La Traviata, which was pretty special – watch it here. You also get a nice shot of the back of Rod’s head throughout, which is a delight.

Needless to say, Instagram lit up like a Christmas tree with arty filters of our bakes, which provided ample blog fodder – so, as everyone likes to look at pictures of cake they can’t eat, here are the highlights from the competition:

And the first prize for the demo kitchen goes to… Florence!

A chocolate cake with…

Prateek’s Bollywood marigold cake joy; Jack’s lemony floral wilderness (he was cruelly marked down for using chive flowers, which, while fitting with the colour theme, do not taste so good with lemon cake). 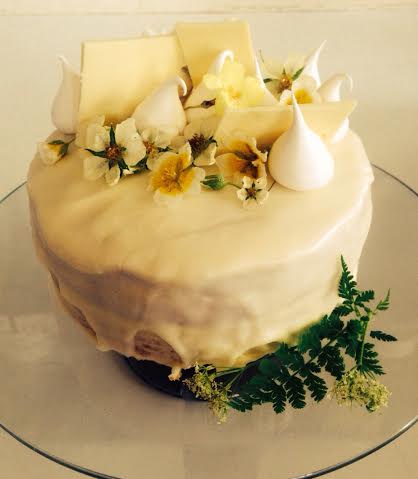 Ashley’s lemon-meringue dreamboat of a cake. Ashley is our resident cake queen, and has already bustled off on one of the weekends to make a wedding cake for various people. Her Victoria sponge is miraculous, and she’s kindly shared her secret recipe.

What I learned this week: Know your strengths and your weaknesses – I’m going to stick to eating cake and let Ashley make it.